I vaguely remember going camping as a young child when we moved from California to Virginia, but I don’t remember us ever camping after that. I remember wanting to camp. My parent’s had backpacked a lot before kids, so our basement was full of awesome gear that I would beg to use. The sleeping outside part was my favorite thing that I remember most about camping. You’d bundle up from the cool air, hear the unzipping of tents in the morning hours and the whispers of the early risers heading out to the toilets or off fishing. When I was younger and couldn’t sleep, I would sometimes grab my pillow and blanket , sneak outto our back deck and sleep under the stars. Thankfully, after years of no family camping trips, each of us has found our way back to the recreational outdoors and for the last few years, we’ve camped as a big family in Maryland and floated in Missouri as well as our own smaller individual family camping trips. This year, we decided we wanted to hit a coastal campground and settled on everyone’s current favorite spot, Maine. We’re the last ones in my family to check out the state and man am I glad we did!

When we pulled up to the campground, we were drunk with anticipation for the sea. The day had already been wracked with disappointment from a late start and a trip to Urgent Care for my sudden ear infection. We had to miss seeing the chocolate moose at Lin Libby in Scarborough due to time, and after a traffic filled drive up, we had to skip dinner at the famous Lobster Shack. Needless to say, we needed a win! My mom texted us when she got there that it ‘was just beautiful’ which meant the hectic morning and long drive was going to be absolutely worth it. Boy we’re we disappointed! Ha! 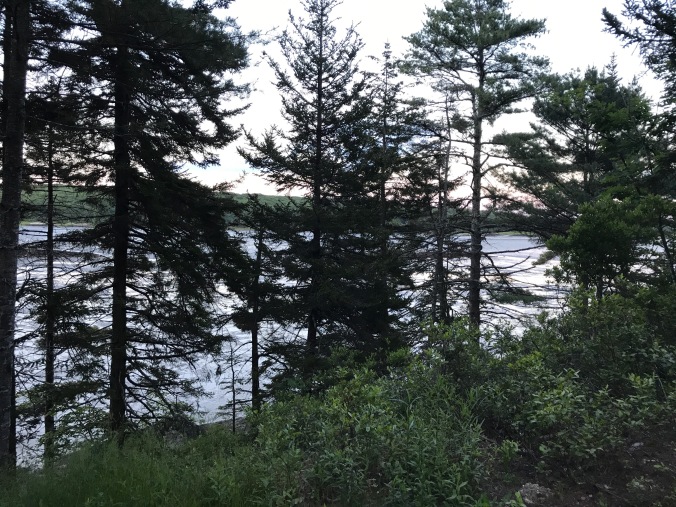 Okay so it was beautiful but it was also bay front and not ‘ocean front’ like we had thought. You can’t tell from the picture but the ‘beach’ was actually the swampy bay minus the water (which is only there for high tide (12-4). UGH and the mosquitoes! One of the beauties of camping near the ocean is that there’s less mosquitoes. Not true when you’re in a swampy bay!! When we got there, the lady explained that the tent sites were pretty far away and that if we upgraded to the ocean view there was a walking path with easy access to the beach and Grandma and Grandpa’s cabin. So we did the upgrade with the encouragement from her and my Mom who was still drunk from the ‘beauty’. Turns out the ‘path’ was an uncut grassy stroll through the woods behind a privately owned cabin lined with no trespassing signs down to the swampy bay… Not at all a straight shot to grandmas for 6 kids under 10!

Determined to stay positive and heavily influenced by the fact that the office was closing, we moved on, popped our tents up 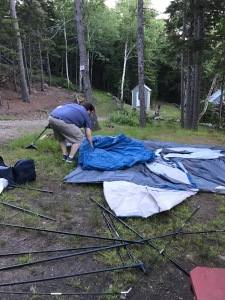 on the cliff side lots with the swamp view and mosquito breeding ground and made the best of it. The kids were happy and we were determined to have fun…so we did. The first glimpse of joy came around eleven when the kids were finally asleep. I had convinced Jeremy we wouldn’t need the second flannel lined sleeping bag so we were cuddled up under our little single sleeping bag shivering, trying super hard to avoid the 15 mosquitoes that found their way into the tent when we could finally hear it. There, in the far off distance, under a blanket of stars and blood thirsty devil bugs…we could hear the crash of the waves. ❤ It was as if the world was taunting me “you’re so close but just not there!” and the ocean whispered back. “I’m here and I miss you!”

Day two of camping was much better because we got to escape the bug bites for a little bit and headed out to the Maine Wildlife Park. It was just a little drive deeper into Maine to Gray. If you thought the trees in Connecticut were crazy beautiful, you have never been to Maine.

The sheer height of them was awe inspiring but when you think of the lives they have had…it’s unbelievable how I had no idea of just how amused and inspired I was. I love nature as much as the next lady but you don’t grasp just how small we are until you take a wander through the forest in Maine.

The park was just as woodsy and interesting 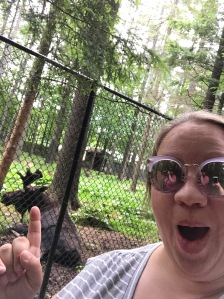 as can be imagined by the name. They have some rehabilitation

going on as well as some rescues and a cacophony of information on the region and its wildlife. The kids got to feed some ducks and a couple bears, talk to some interesting birds and fish, watch some fawns get nursed and of course…WE MET A MOOSE!!!

Everything about this park is fantastic and I would highly recommend taking a visit if  you’re up that way. 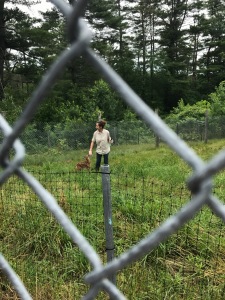 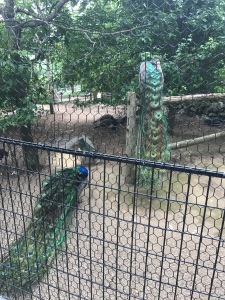 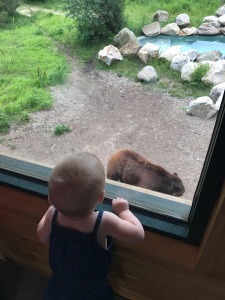 After a quick lunch, we headed to off in separate directions. Some left to go kayaking while the rest of us headed up to Freeport to tour the L.L. Bean Flagship store. It was HUGE and the kids had so much fun exploring the unique spots in the store. It stormed right as we went to leave so our plan to explore Freeport was shot.

However, the main strip of shops and cute little eateries looked like it would’ve been a lot of fun to wander through. Instead, we went back to the campsite for a small dinner and then tried to sleep while the rain tickled our tent all night.

That’s when it happened… (continued in “See the Line Where the Sky Meets the Sea?”)